Every big brand is on the hunt for their next original viral campaign.  With Super Bowl just around the corner, the advertising frenzy is hotting up and already the likes of Pepsi, VW, Cheerios, Unilever, Doritos, H&M are paying top dollar to rule the web.  Trending viral ideas involve actors, celebrities, models, public ambushes, quirky songs, spoofs and set ups and even a plastic devil baby.

However this viral has nothing to do with Super Bowl whatsoever, but may well become King of the Virals.

And the price for this top spot?  Worryingly so, it’s quite possibly his life….. 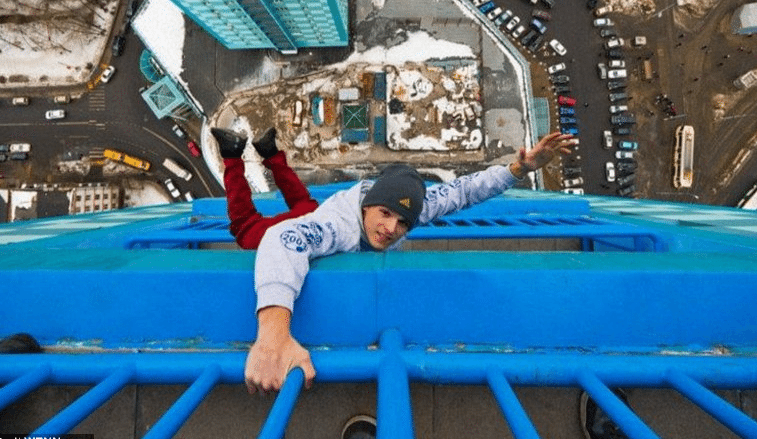 The video that has gone mega-viral this week is 26 year old Ukrainian daredevil ‘Mustang Wanted’ (he has kept his real name anonymous).   Mustang Wanted has given up his legal career to pursue his sky-walking antics.  In this viral we see him hanging from the ledges of sky scrapers by his fingertips and performing death defying stunts and sky-walks.  He has released the video on YouTube in order to attract a sponsor, so that he is able to turn his ‘hobby’ into a career: though a very short lived career I strongly suspect, as ‘thrill seeking’ doesn’t cover it, this guy is playing with death.

WARNING:  Please do not watch this viral video if you suffer from vertigo, jelly wobbles, sweaty palms, are prone to fainting, have any weakness of heart, have jittery nerves, have experience of projectile vomiting or are a self confessed cowardly custard and proud of it.

It ought to go without saying ….. Never try this as part of your own marketing strategy!  Why not let TellyJuice come up with an equally exciting, but far safer campaign?